I don’t know if you got the chance to catch the SEC championship football game or the Big 12 championship game this past Saturday. Both NCAA contests were worth watching.

Alabama took on top ranked Florida and Texas played rival Nebraska. The two teams that came out on top will likely play for the national championship: the University of Alabama and the University of Texas. I was proud of both of those teams not only because they played well enough to win, but because Growing Leaders, the organization I serve, has the privilege of working with both of those athletic programs. 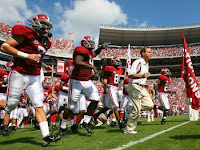 The Longhorn football team has been using our Habitudes® for Athletes for three years now. Freshman athletes from several Alabama teams just began going through the curriculum this year. Having spoken to athletes on both of those campuses—I have a great respect for the programs and traditions they’ve established over the years. We are humbled to be able to provide this character-based leadership curriculum for student-athletes on those campuses. The staff at both schools have become our friends. They really care about the lives and the development of their players, both men and women.

More importantly, however, character-based leaders win outside their sport. They are the ones who give back to their communities and families when they’re not playing. Colt McCoy, quarterback for the Longhorns, went on a short-term mission trip during the off-season. (So did Tim Tebow from the Florida Gators). Colt and Tim will both be beacons for the game long after they graduate from college.

One of the coaches from Texas wrote me a kind note after their victory. He simply said that they owed the growth in character and leadership on the Longhorn football team to their relationship with “Growing Leaders.” (I’m honored, but I know that coaches for both teams are the ones who deserve the credit.)

In any case, I just wanted to voice this truth. Robust character and healthy leadership do pay off. They always pay dividends off the field. In the case of the Crimson Tide and the Longhorns—they paid off on the field, too.

This ought to be a great national championship game in January.

X
Speaking Their Love LanguageHabitudesI rarely do this, but I have to make an exception this time. Gary Chapman wrote a splendid book back in 1992 called, The Five Languages of Love. In it…

The Habitudes® of a National Champion

X
Announcing Leadership2GoLeadershipNext month Growing Leaders is launching a new mentoring community, in which I will be leading, called Leadership2Go. I am so excited to present my new…