Parents of high school students have been shocked by how many teens have leapt onto the scene with such strong emotions at the protests across America. Parents who assumed their child thought just like they did have seen a new side to their sons and daughters. Parents who felt their kids embraced law and order and were satisfied with being merely a non-racist family have often found themselves at odds with the younger generation in their household. Many young people feel much passionate about the protests today.

While there are people from various generations protesting, I’ve wondered whether “Black Lives Matter” has become a generational focal point, especially among young white people.

Aly Conyers is a high school student from South Carolina who drove up to Howard University to march and to protest police brutality. She’s part of a military family and has lived among people in uniform all her life. Today, however, she’s ignited by what she believes is a misuse of power. She grabbed a megaphone and shouted, “We are the face of this movement. We are the face of a generation. We will not let this stand. Enough is enough.” 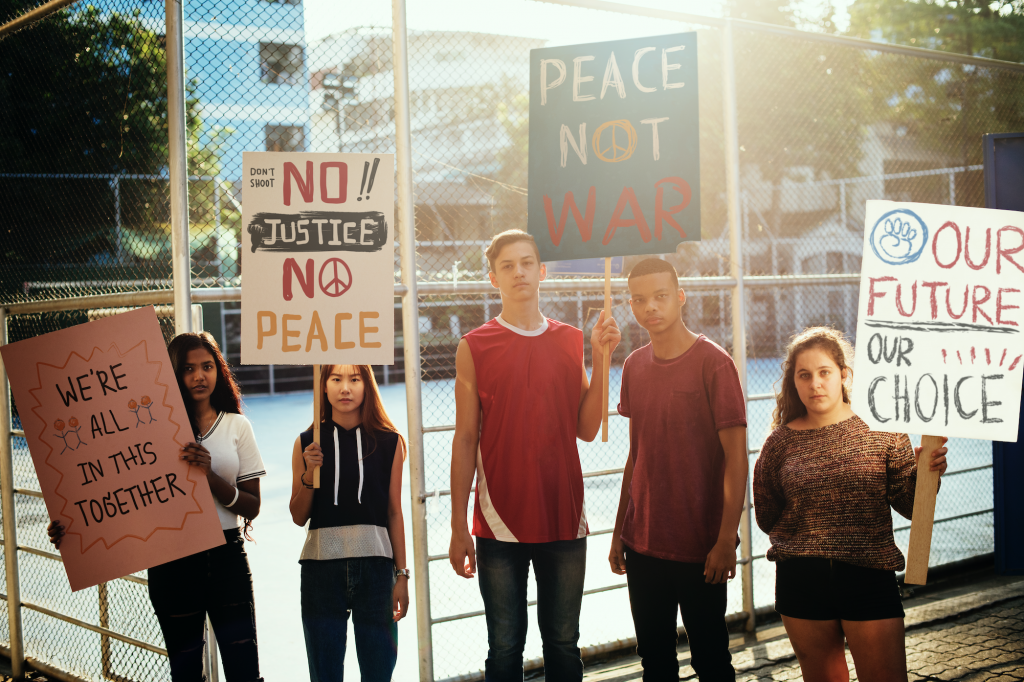 Generation Z Seems to be Leading the Way

The Washington Post said, “Across the country, thousands of teenagers like Aly are on the front lines of the protests demanding justice for George Floyd and other victims of police brutality.”

The police are taking them on, using tear gas and rubber bullets to disperse the crowd.

“The images of teenagers being roughed up by police officers evokes memories of the Children’s Crusade in 1963, when more than a thousand black students skipped class for a civil rights march in Birmingham, AL. Police aimed fire hoses at them, launching them onto the street. Some of the children joined hands, forming a human chain to fight the blasts,” writes journalist Samantha Schmidt for the Post.

More than half a century after the civil rights marches, teenagers at the George Floyd protests are stepping up on their own, risking exposure to the coronavirus, projectiles from police, defying curfews, and in many cases, as well as the wishes of their parents.

My challenge for us: we must be students of our students.

Seven Realities That Could Be Happening

This is only an observation. I could be wrong. But my experience talking with parents and teens reveals a divide that many of us didn’t see coming. Call it a “generation gap,” but it’s a chasm between older adults and young adults in how we view politics, social justice, gender identity and spirituality. And maybe a lot more issues. Consider these observations:

1. Many teens don’t understand why their parents’ generation allowed such injustices and improprieties for so long. They feel adults let them down.

2. Many teens have heard their parents’ generation complain about their generation being wimpy, selfish, and lacking work ethic. Now they’re demonstrating what’s inside.

3. Many teens have learned of their parents’ generation marching and protesting against the establishment, and then joining the very establishment they protested against.

4. Many teens heard their parents’ generation speak of the evils of greed and materialism but practiced the opposite as consumers and citizens. Our words felt hollow.

5. Many teens have this quiet sense that their parents’ generation didn’t’ tell them the whole story about race and American history. Some feel betrayed.

6. Many teens feel they’re only doing what parents taught them to do, since all their lives mom or dad said, “Live a purposeful life,” and “Stand up for your values.”

7. Many teens want to change things. Not to shun what they’ve enjoyed but to simply enable others to also enjoy what they have.

The Washington Post recently reported on Naomi Spates, a 17-year-old who attended protests at the U.S. Capitol with a friend. Naomi is a rising senior at Bladensburg High School in Prince George’s County, MD. During the protest, she stood a foot away from a row of police who had formed a barricade. Naomi chose her approach. She asked a black police officer, “Do you have any children?”

“Yes, I have two daughters,” he replied.

Even if you don’t agree with their methodology, can we as adults at least affirm their courage to step up and speak up for what they believe in? Let’s be encouragers for them. Then, let’s look in the mirror and ask ourselves: Have we modeled the way for them?

X
Parents: How to Have Patience for Yourself in a Culture of Comparison…CultureI remember overhearing a dad talk about what he’d just done for his children. Actually, he was bragging about what he’d done for them. This man just r…

Seven Reasons Why So Many Teens Are Involved in Protests

X
Escaping the Battle of Words and Embracing the Battle for Hearts…CultureOur world today is in combat over language. Two sides of any issue vie for the best words that make any opposing view seem, well…wrong. Everywhere we …