This month, I took a week to celebrate the graduation of both of my adult children. Our family traveled to London and Paris and enjoyed the sites and tastes of Europe.

While there, we had a number of people recommend we see the show, “Moulin Rouge.” In the words of several of them, it was “smashing.” So, my son went on-line to explore what made the live show so entertaining and discovered attendees debating whether it was appropriate for children. You see, while the show is full of dancing and talented actors, it also features topless women and nudity.

The debate surrounded a mother’s opinion that her six and seven-year-old kids were “worldly” enough to see it. After all, she argued, they’d been exposed to lots of other adult realities and were fine. She believed they were able to comprehend what was happening, enjoy it as entertainment and not turn into delinquents.

While I make an effort to refrain from judgmental attitudes, I would say the readiness of children for such a show has little to do with their brain’s ability to understand topless women on a stage.

I’d like to spark a conversation here. Let me know your thoughts.

Measuring Maturation in Our Young 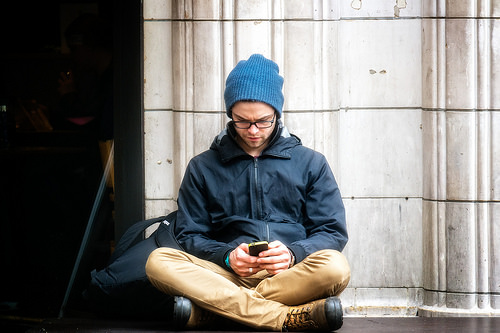 photo credit: garryknight Texting on a Friday via photopin (license)

Today’s kids are more savvy than ever. In my book, Artificial Maturity, I remind readers of how students in contemporary culture have been exposed (perhaps over-exposed) to much more information and more scenarios—albeit on a screen at times—compared to my generation at their age. The effect? It has been both positive and negative. Often students are cognitively advanced but emotionally behind. Some parents believe it’s made their children more worldly-wise and ready for society. They would say their kids are less naïve. However, some psychologists argue that by the time a child reaches adolescence, the negative inputs on television, in the movies and on video games foster aggression, addiction, angst and bullying at school.

According to the American Academy of Child and Adolescent Psychiatry, “The typical American child will view more than 200,000 acts of violence, including more than 16,000 murders before age 18. Television programs display 812 violent acts per hour; children’s programming, particularly cartoons, displays up to 20 violent acts hourly.” Some argue that kids watching adults in sexual scenes has fostered addictions to pornography (among both males and females), harassment and possibly even date rape. When students are exposed to graphic realities early, their minds can comprehend it, perhaps, but their emotions can be stirred in an unhealthy way. It affects them like a magnet; their mind is fine but their emotions are now pulled or repelled, depending on their emotional response. In extreme cases, it’s like a muscle that tries to lift a heavy barbell and is unready for the weight. Coping becomes the goal. A vivid example would be Dissociative Identity Disorder (what psychologists formerly called Multiple Personality Disorder). Simply defined, it is what children do when they are exposed to trauma and are unready to process it in a healthy manner. They develop other personalities (sometimes several) inside of them to cope with it. Coping mechanisms are poor substitutes for genuine maturity.

My point is this. Parents and educators must remember that whether a child is ready to be exposed to a show like “Moulin Rouge” has little to do with their cognitive abilities. It has more to do with their emotional maturation. The numbers show that young boys who are exposed to pornography at nine years old are more likely to struggle with addictions later. Their emotions (not their ability to understand) are under-developed and unready for this kind of exposure. This is the genius behind movie ratings. In 1968, I remember when I first saw letters next to films that came out in the cinemas. By 1984, the ratings expanded to this list:

G – General audiences of any age

PG13 – Parents should accompany a child under age 13

R – Students not admitted under age 17 without an adult

While we can debate all day long about what a movie should be rated, this system was not created in a vacuum. The Film Rating System was designed to help adults discern the emotional readiness for exposure to violence, nudity, substance abuse, language and graphic scenes. A savvy kid does not always equate to a ready kid. Sociologist Dr. Anthony Campolo once said, “I don’t think we live in a generation of bad kids. I think we live in a generation of kids who know too much too soon.”

Steps We Can Take to Lead Students Well:

1. Learn to talk over significant experiences with them.

Young people at any stage of their childhood can process some realities faster than others. Some can handle violence more easily than nudity; others can handle graphic language more easily than graphic tragedies, like blood and injury. We can help them make sense of their emotional experiences by asking good questions.

2. Watch what captivates them or causes them to emote.

When kids are young, they often cover their eyes during scary movies or gasp at certain scenes. This can be an obvious clue that their emotions are challenged to handle what’s in front of them. Remember—this is rarely about cognitive abilities. It’s a matter of emotional readiness.

3. Ask them what they’re feeling after an exposure.

Counselors will not only help their pre-adult clients process what they think, but also how they feel emotionally. This is vital. It’s common for males to find it easier to put their finger on what they think than how they feel. Give them a list of words to choose from for their feelings: scared, ashamed, embarrassed, etc.

4. Remember the stages of learning that students experience.

Years ago, Dr. Rick and Kathy Hicks wrote a book called, Boomers, Xers and Other Strangers, where they outline how children learn and grow:

Notice in the first two decades, kids are watching and emulating those around them. Whether we think they are ready to be exposed to an experience or not, we all tend to move in the direction of our dominant thoughts, according to the late Dr. Hans Selye. The clearest leadership reminder I can offer to guide you is this:

“People do what people see.”

X
One Parent Addiction that Produces RegretsCultureHere’s a twist to our traditional thinking. In a recent survey of 2,000 secondary school students, responders felt their parents were using a mobile…

Is a Savvy Student a Mature Student?

X
The Secret Behind One of the Largest Youth Movements: Podcast #48…CultureToday, I’m excited to share with you a conversation with Jason Russell. Jason is the co-founder of Invisible Children as well as a film director and…