Captain Kangaroo passed away on January 23, 2004 at age 76. This is a bit odd to me because, frankly, he always looked to be 76, when I watched him on TV as a kid. He always came across as this meek, gentle guy who found his niche with kids. Flipping through channels on my TV remote recently, I saw him again on a re-run—which reminded me of the following story.

Movie star, Lee Marvin was interviewed years ago by Johnny Carson on the Tonight Show. Before becoming an actor, Lee was a genuine hero. He won the Navy Cross at Iwo Jima during World War II. But that night, on the show, he shared an interesting fact I didn’t know.

“Yeah, yeah… I got shot square in the bottom and they gave me the Cross for securing a hot spot about halfway up Suribachi. But, Johnny, at Iwo, I served under the bravest man I ever knew… We both got the Cross the same day, but what he did for his Cross made mine look cheap in comparison. That dumb guy actually stood up on Red Beach and directed his troops to move forward and get the hell off the beach. Bullets flying by, with mortar rounds landing everywhere and he stood there as the main target of gunfire so that he could get his men to safety. He did this on more than one occasion because his men’s safety was more important than his own life. That Sergeant and I have been lifelong friends. Johnny, I’m not lying, Sergeant Keeshan was the bravest man I ever knew.”

Johnny Carson smiled in amazement, because that sergeant’s name was Bob Keeshan. You and I and the rest of the world know him as Captain Kangaroo.”

But Captain Kangaroo wasn’t the only quiet giant who never called attention to himself. Life is full of individuals you’d vote “least likely to be heroes.” There was this wimpy little man on PBS, who passed away gently and quietly just like Bob Keeshan. His name was Mr. Rogers. He died on February 27, 2003 at the age of 74. You’d never know who he was by training because of what he portrays on TV, even today. 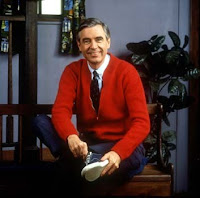 I read recently Fred Rogers was a U.S. Navy Seal, combat-proven with over twenty-five confirmed kills to his name. He wore a long-sleeved sweater on his show, to cover the many tattoos on his forearm and biceps. He was a master in small arms and hand-to-hand combat, able to disarm or kill in a heartbeat. Once famous, he never liked to refer to these days in his younger life.

After the war, Fred Rogers became an ordained Presbyterian minister and therefore a pacifist. Vowing to never harm another human and also dedicating the rest of his life to trying to help lead children on the right path in life. He hid away the tattoos and his past life and won our hearts with his quiet wit and charm.

I find it interesting that these two men, Captain Kangaroo and Mr. Rogers, both decided to silently transition from a war hero and to invest their lives in the next generation. Somehow they became convinced that the best way to live a “hero’s” life is to equip kids to be those heroes, too. Those two saved dozens of men and women on the battle field in World War II. But, they’ve likely done more good since their war hero days working with young people. In actuality, they may have saved millions of young lives by teaching kids to live honorable lives; training them to speak honestly, share generously and act kindly.

Thanks to a few readers who commented below, I’ve discovered that these stories about Mr. Rogers and Captain Kangaroo may in fact be urban legends!  It was not my intent to mislead anyone and I appreciate those who brought it to my attention. Don’t miss the real point that is made in the final four paragraphs below: there are lessons to be learned from the quiet giants around us. Let’s follow their example as we lead the next generation well.

America’s real heroes don’t flaunt what they did; they quietly go about their day-to-day lives, doing what they do best. These two men earned our respect during wartime. But, they deserve our admiration by how they chose to spend their lives once the war was over.

Look around and see if you can find one of those heroes in your midst. If you do, express your appreciation for them. Often, they are the ones you’d least suspect, but would most like to have on your side if anything ever happened. They are courageous. They are self-effacing. They are visionary. They’re wise in how they invest their time.

One more thing. Take the time to see people, especially young people, through the eyes of possibility. With encouragement they could be the next Captain Kangaroo or Mr. Rogers. Then, evaluate how you are investing your time right now. How much of what you do is about providing for the next generation coming behind you?

The more we go about our business—this great work of pouring into the next generation—the more we join the ranks of Bob Keeshan and Fred Rogers, and earn the title: Quiet Giants.

X
Growing Leaders in AsiaCultureWhew! Just returned from a whirlwind week in Singapore. I don’t know if you’ve ever been to this beautiful nation—but it is unforgettable. Clean, colo…

X
Doing Life WellCultureJust got off a plane in California for the holidays. During the flight, I watched a movie I had wanted to see for months. It was called: Post Graduate…