You may remember the tragic story from last April. A sixth-grader found his dad’s 9mm handgun, loaded it with a magazine of bullets, and walked onto his campus at Plymouth Middle School outside of Minneapolis. He positioned himself in a hallway, shot the gun toward the ceiling, and watched fellow students run and scream in terror. His goal was to commit suicide, but he didn’t have the courage to do so. So, he chose this method and recorded it in a suicide note. “I hope my death makes more sense than my life,” wrote the 12-year-old boy in a spiral-bound notebook about his plan to commit suicide by cop. He hoped a police officer would shoot him.

This incident was a part of a surge in school shootings last spring, often overlooked because of the COVID-19 pandemic. There were 14 shootings that occurred on a school campus in less than three months. According to the Washington Post, it was “the highest total over that period during any year since at least 1999, according to a Post analysis of nearly 300 incidents.” The school shooting frenzy started with the Columbine High School massacre in April 1999, over 20 years ago. Since then, over 250,000 students have been exposed to a campus shooting during school hours.

But why the surge this year?

I believe the answer is trauma. What Trauma Does to Students

According to a nationwide study by the Barna Research Center, 82 percent of Generation Z members report experiencing at least one traumatic event in their lives. For many teens, it was something that happened during the early years of their lives, but for even more, it was the pandemic. In the story above, this sixth-grader wanted to die, so he took a gun to school. I’m not sure if parents, teachers, and coaches recognize the toll that COVID-19 had on America’s kids. Even student leaders felt out of control and were often at odds with their emotional responses. Some never know when their fears will strike and for how long. Add to that the societal pressure to have it all together and it can be overwhelming.

Often, teens feel alone even with people around.

Millions experience PTSD (post-traumatic stress disorder) at least to a degree. They are triggered by similar incidents that are similar to what first caused the trauma or that remind them of it. An infection that triggers the fear of death. A loved one leaving the house, fostering a sense of loneliness. An unemployed parent, causing anxiety about adequate provision. The footsteps of a stranger behind them on a dark night, producing paranoia. These are normal triggers that illustrate their bodys’ attempts to keep them safe. Sometimes teens blame themselves for the problem as a natural method for taking back control.

But PTSD does not have to rule their days. We can lead them through it.

You’ve likely heard of the antidote to PTSD. Psychologists call it PTG (post-traumatic growth).  This happens when a person experiences trauma and has someone process it with them until they can make sense of it and see the good that can come from bad experiences. They see the “silver lining in the dark cloud.” Their positive response actually leads to growth instead of a disorder. Those who experience PTG:

Let me suggest some clear steps we can take to lead students with trauma:

1. Encourage them to begin running, biking, or exercising.

Movement therapist Erica Hornthal specializes in PTSD and says that movement may be a significant component in healing trauma. She says the body needs a way to voice its own story for us to truly move on. When we run, we allow stuck feelings to resurface so that we can vocalize them. “That’s what it takes to release those trapped emotions and for us to really rewire, reintegrate and change the brain.” Physical movement is often step one in the releasing of negative emotions.

2. Meet with them and listen as they process their traumatic experiences.

Once they are ready, counselors agree that meeting with someone to listen and empathize is therapeutic for students. Set aside time to enjoy coffee and just listen to their difficult stories. Avoid replying with a pithy solution to their traumas. Just listen, empathize, and guide them to see what good can come from it all. I remind myself to stand on this LEG as a leader: Listen, Empathize, and Guide. Research shows that four out of five times, it leads to post-traumatic growth for the recipient.

3. Choose to embrace an accurate memory and a positive narrative.

I think we forget how often people choose the narrative they carry with them about the past. We all know people who’ve experienced tough times, and some may come out of it with a positive attitude while others don’t. Make a list of pros and cons from what happened in your students’ lives this past year. The cons list reminds them you’re in touch with the difficulties; the pros list reminds them of a potentially positive narrative they can carry with them into the future. We must equip them to choose hope.

A new qualitative study published in the Community Mental Health Journal has found that young adults who share their stories of living with mental illness can increase their well-being and feel less stigmatized. Yet this should be a means to an end. Once they take the stigma out of their stories, looking outward at those who could use their help and forward to give them promise is one big secret to living well.

I’m not a licensed counselor. My post-graduate degrees are in leadership development. But I recently walked through the steps above with a college student named Rachel. She’d been traumatized by a COVID-19 infection and felt paralyzed. We met regularly for a period of five months, and I’ve watched her begin looking outward and forward since late January. It has been a joy to be a guide on her journey. But she is the hero, not me.

As we launch another school year this fall, we can be the leaders who understand that students need more than academics to succeed. Social and emotional learning, as I’ve outlined above, may be the most important leadership action you take. 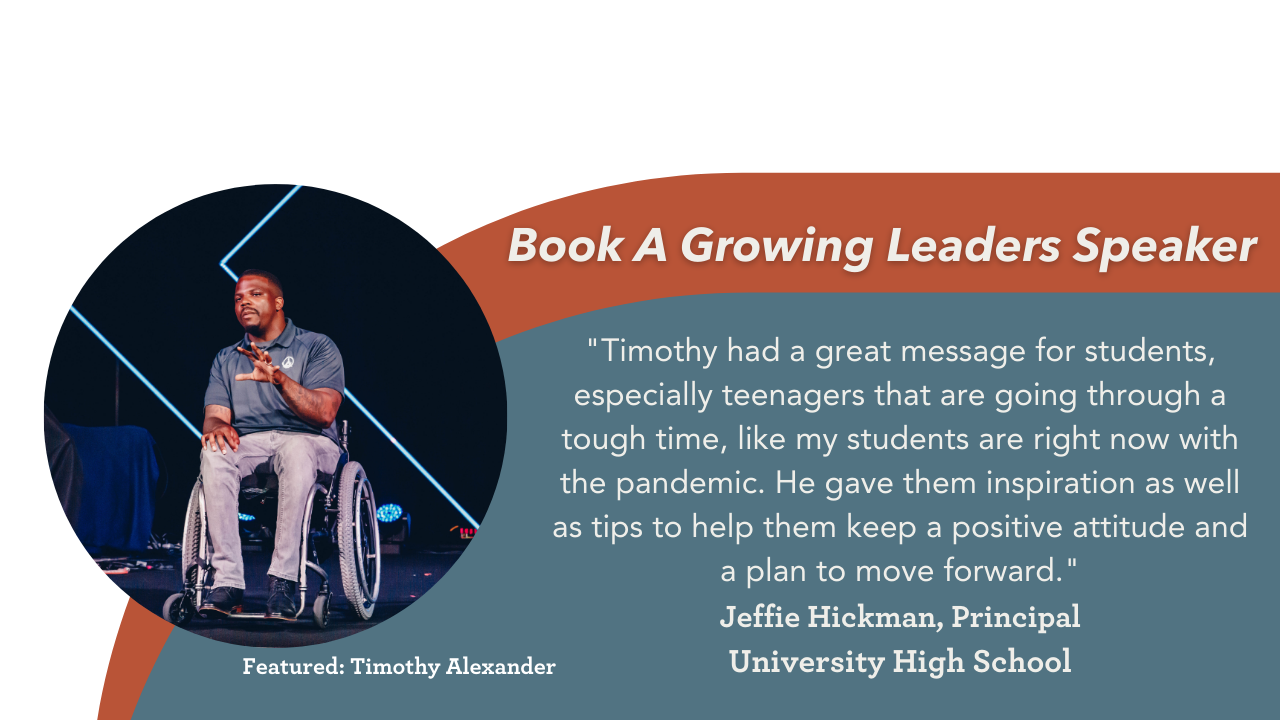 X
Four Lessons on Leading Young People From the Tokyo Olympics…CultureBy: Tim Elmore The postponed Olympics Games held in Tokyo are now history. As always, there were highs and lows for competing athletes, but I’d like t…

X
Ever Heard of the Blackout Challenge? How Social Media Is Changing Peer Pressure…CultureBy: Tim Elmore I remember feeling tangible peer pressure in high school. Friends pushed me to smoke cigarettes and marijuana, drink beer, and be sexua…