You probably remember the story that broke on the news last month and the video posted about it on Facebook that captured over 22 million views.

Matt Cox heard that his daughter, Kirsten, got suspended for three days from riding the school bus because she bullied classmates on it for the second time. She hadn’t learned her lesson. That was enough for Matt Cox to take action. During the suspension, instead of driving her to school he made her walk five miles to the campus, while he followed slowly in his vehicle.

You can imagine, Matt got thousands of mixed reviews on social media.

“Bullying is unacceptable,” he said. “This is my small way to stop it in my household.” Under the video, he posted: “UPDATE: lesson learned. Still has all her extremities intact, is happy and healthy and seems to have a new outlook on bullying as well as a new appreciation for some of the simple things in life she used to take for granted.”

Matt added that too many kids feel entitled to privileges like being taken to school every morning by car or by bus. He chose to address the entitlement by adding a little exercise—making his daughter walk to school.  Some called this parental “bullying.” “How can you do this to your daughter?” commenters wondered. Let me respond for Matt.

First of all, it’s all a matter of perspective. I rode my bike five miles to school everyday, and never thought anything of it. In fact, several of my classmates did. But, today, some feel it’s bullying because it’s used as a disciplinary action for misconduct. Wow, have times changed.

However, this is actually part of a larger narrative. It isn’t just disciplinary action. In general, adults now define “hardship” very differently than we once did. We assume our young people are fragile, and actually invite fragility in response. They became fragile because we teach them to be. Whatever you think of Matt Cox, his leadership flies in the face of most us today. Because we see our kids as fragile, we lessen hardships, even when they’ve violated rules or disobeyed us.

The Answer is Rarely to Remove the Hardship

Too often, parents today default to removing the stressors that cause our kids angst or distress. Many parents push their children ruthlessly in academics, but do the opposite when it comes to other categories of their life, like screen time, chores, social skills or part-time work. It’s as if we have but one “report card” for success, and it is terribly incomplete.

In their book, The Coddling of the American Mind, by Greg Lukianoff and Jonathan Haidt offer insight into what’s happening to our students today from a social science point of view. Here is a summary of their thoughts in my own words:

American parents and schools have removed much of the traditional risks that kids experienced in the past, in the name of safety. The unintended consequence for millions is that our kids have become risk averse.

If members of Gen Z have been risk-deprived and are therefore more risk averse, then it is likely that they have a lower bar for what they see as daunting or threatening. They will see more ordinary life tasks as beyond their ability to handle on their own without the help from an adult. It should not shock us if anxiety and depression rates begin rising rapidly as Gen Z students arrive on the college campus.

That is exactly what’s been happening. An increasing number of college students are looking to adult authorities to insure they feel safe, including preventing speeches that are controversial or requesting safe spaces with puppies when they feel stressed out. Should this surprise us?

Further, our culture has become more educated about mental health terms today. In doing so, we’re able to positively identify and later diagnose anxiety and depression. This is good. Conversely, there have been some negative effects as well. Applying labels to people can create what is called a “looping effect.” Psychologists use this term to describe the change in a person’s behavior who has been labeled and it becomes a self-fulfilling prophecy for them. Once a symptom has been called to your attention, it is easier and quicker to spot it in the future.

The moment we label a kid, he or she becomes more likely to fulfill that identity, unless they are a very strong willed person who’s determined to do the opposite.

Social psychologist Jonathan Haidt writes in The Coddling of the American Mind,

“This is why labeling is such a powerful cognitive distortion. If depression (or anxiety) becomes part of your identity, then over time you’ll develop corresponding schemas about yourself and your prospects (I’m no good and my future is hopeless). These schemas will make it harder for you to marshal the energy and focus to take on challenges that, if you were to master them, would weaken the grip of depression.”

We must change our kids’ narrative: are we building paper dolls or cast iron kettles?

Our leadership will either cultivate a “paper doll” or a “cast iron kettle” narrative in them and in us. Do you remember these items?

Paper dolls are flimsy paper figures girls played with decades ago. They were literally dolls made from paper, hence they were fragile; they could be torn easily, and didn’t last long. Over the years, toymakers realized they needed to use thicker paper or even cardboard or plastic, as the shelf life of a paper doll was just a few days. They’re still around today, but they usually serve as collectables, since they’re very delicate.

Cast iron kettles, on the other hand, are sturdy pails for cooking. Their thick material can handle intense heat, they can cook food for hours, and what’s more, when they get hot, all the tasty flavors of past foods cooked in those kettles came out. My friend, Dr. Bhrett McCabe interviewed me on his podcast recently, and he mentioned this helpful metaphor for students. It’s a picture of grit and resilience.

What if you researched these two metaphors—paper dolls and cast iron kettles, and hosted a conversation with your students. Talk about the characteristics of each and about the people you know who are like each one. In doing so, your language can too create a new narrative in them and even inform your leadership of them.

Empower Your Kids to Enter Adulthood with Resilience:
Discover the 12 Huge Mistakes Parents Can Avoid 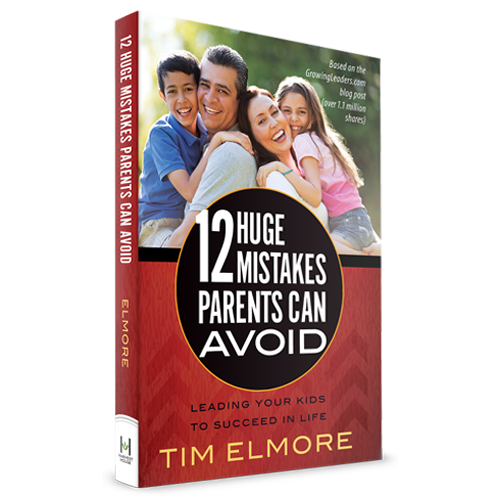 X
Equipping the Future Leaders of Our CountryGeneration ZIn the wake of last year’s mid-term elections, I reflected on how people’s voting habits form. How do we develop our worldview? Or, how do we choose o…

How One Parent Developed a Mentally Tough Kid

X
A Powerful Leadership Lesson from a Super Bowl Athlete…AthleticsYou don’t have to love football to know—the 2019 Super Bowl will take place this Sunday. The NFC champion Los Angeles Rams will take on the AFC champi…