The sports world was consumed this summer with Derek Jeter’s farewell to the New York Yankees (and baseball fans everywhere). He got applause from every ballpark because Jeter played the game with class. He ended his career at Yankee stadium with a walk-off single that won the game. He worked hard, kept a great attitude, was a great teammate, and was very competitive—but never once, in 2,903 games of major league baseball, did he get ejected from a game. Yep, he is different. 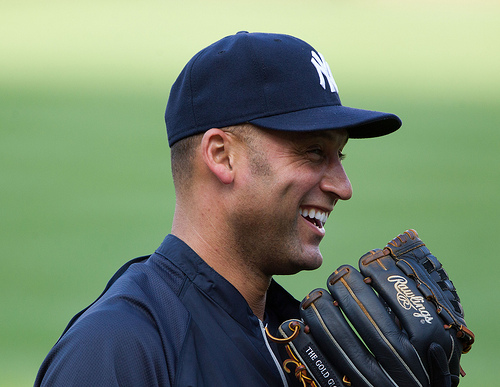 When asked how and where he learned to play the game—he refers to his father. From his own lips, here are eight lessons we learn about leading kids from Derek Jeter’s dad:

Derek said he watched his dad work relentlessly as a substance abuse counselor. He never claimed to have the biggest talent, but he taught his kids to “work hard and never let anyone outwork you.” That way, it’s not about giftedness but work ethic.

Derek’s dad modeled the way in everything from optimism to passion to fun around the house. Derek said his proclamation that he’d play shortstop for the Yankees came from his dad who played college baseball: “I wanted to be like him.”

His dad never once pushed him into baseball, but once he showed a passion for it, Jeter’s parents helped fuel it. Many an evening, Jeter and his sister Sharlee could be seen fielding grounders or taking swings in the yard with dad.

Like most teens, Derek had clashes with his dad, but he said later, “While he was tough, he was always fair.” Dad would explain the reasons why he’d set up the rules and boundaries in the house. It provided emotional security for the kids.

Every August, Jeter was presented with a contract drawn up by his Dad on a legal pad, permitting him to play sports only if he complied with a series of expectations that included posting high grades, participating in extracurricular activities and avoiding drugs or alcohol. Derek never once violated that contract.

Derek remembers, “There were a lot of times when you clash with your parents, but they were pretty good at explaining things. When you’re a kid, you don’t always agree, but my parents were always good at explaining, ‘Why.’” This helps kids follow.

Derek says the greatest lesson he learned from dad was to stay positive. Even in his 32-game slump in 2004, Derek put his uniform on, expecting to get a hit. He’d talk to his dad every day about the potential of that new day. He knew slumps would pass.

Derek tells us, “My parents have always been supportive—daily.” So on Father’s Day, he expects that he’ll tell his Dad, ‘Thanks,’ but that is not anything unusual—Jeter thinks that is an appreciative sentiment that should be relayed more than once every 365 days.

When you lead kids well, the relationship evolves from supervisor to consultant to friend. Their relationship has matured over the years, but Derek Jeter says that he knows with any pressing issue, Dad is still one of the two people he’d turn to first. “We’re more friends than anything,” Jeter said. “I think as I’ve gotten older, you still have the father-son relationship, but we’ve become closer friends. He’s still my Dad, but more so, a friend. I’d definitely go to him first with anything.”

How could a parent or coach want anything more?

X
The Secret to Remember Critical InformationEducationWhen I was a freshman in college, I remember taking a Jerry Lucas course on memory. It was designed to increase one’s ability to remember—and I en…

X
A Leadership Lesson From the 2014 World Series Teams…AthleticsFollow @TimElmore I’m not sure if you have a dog in the fight. Maybe you’re from New York or Boston. You may be from L.A. or St. Louis or Detroit …