Today—I’d like to start a conversation. It’s about long-term thinking, and it’s inspired by a move that NFL player Chris Borland recently made. There is a deeper principle behind the move… and it has two sides to it. I want to know your thoughts.

Perhaps you heard the news: San Francisco 49ers linebacker Chris Borland recently retired from football… at 24 years old. That’s right. Just when his peers are ramping up to begin their career, Chris is retiring from the one he loves. The gritty, under-sized hitting machine led the team in tackles his rookie year. He lays it all on the line, every game, just like all coaches want from their players. He’s not quitting because he can’t do it anymore. His rationale is divergent.

His story is a bit different in that he cites his reason as a fear for his long-term health. The NFL has released numbers on concussions, and more people — including athletes — are aware of the problem. Borland was the fourth player under 30 who left the game in under a week’s time.

Even though concussion numbers were down by 25% last year, we are now becoming all too familiar with the long-term side effects of playing for 5-8 seasons of this hard-hitting game. Trauma on both the head and the body have lasting effects on the player’s quality of life (and sometimes quantity of life) following retirement.

Looking at Both Sides of This Issue

There really are two sides to this issue: short-term thinking and long-term thinking. There is rationale to both and that’s what I believe is worth a discussion.

For many players, getting drafted into the NFL has been the single greatest goal of their life. If they were honest, hundreds would say it is the only context they know they can succeed. It’s their life; to cut it short seems unwise, even ridiculous. Short-term thinking says: Stay in the game, play as long as you can, and make as much money as possible. At least when you’re unable to play anymore, you’ve generated lots of income and won’t have to rely on mastering some other skill set in midlife.

Long-term thinking says: Consider the vast amount of your life that will be lived post-football. Even if you are strong and experience a long career—at best, you’d play 10-18 years. (Quarterbacks and special teams often outlast other players). Once this long career is over, you still have at least 25 productive working years left. It’s like halftime, and you still have lots more game to play. What then?

According to USA Today, Chris Borland is the first player to hang his decision on concerns about the risks attached to repeated head trauma. He actually wants to enjoy his life when he is 60 years old, to be able to think straight and enjoy his kids and grandkids. Even though he’s sacrificing some robust years and some awfully good income, he’s trading the short-term benefits for long-term outcomes. His logic:

When making a decision…

Of course, the other side of the coin is the logic “Seize the day.” When opportunity knocks at your door, don’t hesitate; you may never get this chance again. NFL players know there are younger guys coming up from NCAA programs who are more than happy to replace them (and take their paycheck).

I am happy to see the NFL taking some great steps to solve this problem. In fact, Growing Leaders recently entered a partnership with them, and it’s been encouraging to see how they’re investing in athletes both young and old. They’re expending resources to help fund campaigns for youth football, and on other levels, to facilitate a safer game. Progress is being made. If you look at the game historically, it is far safer today than it was a century ago. During the first decade of the 20th century, 17 NCAA players died playing the game. I guess we should count our blessings.

At the same time, many would agree that long-term thinking wins in the end. I teach student leaders this simple principle when making choices: The further out you can see into the future, the better the decision you’ll make today.

Former Steelers running back Rashard Mendenhall retired from the NFL at the age of 26. He said, “There is another life apart from football, and you can be happy. You can still work. It’s encouraging to see guys say, ‘…I can do this.’” His comment is meaningful because of what I mentioned earlier: for many of these gifted athletes, football is the only life they know. Many have not finished college, and some may not have developed employability skills outside the game. Rashard and others are taking their chances on life after the game.

Tell me your thoughts? Is it better to seize the day… or seize the future? 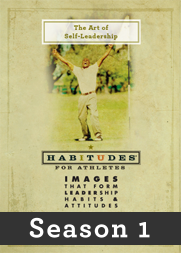 X
The Best Two Questions to Ask as We Develop Students…CultureFollow @TimElmore In February, I led a workshop at the National “First Year Experience” conference in Dallas. Several university staff spoke to me…

X
Building Your Personal BrandauthenticityFollow @TimElmore I find myself talking to high school and college students about personal branding all the time. Brands and labels are so much a part…